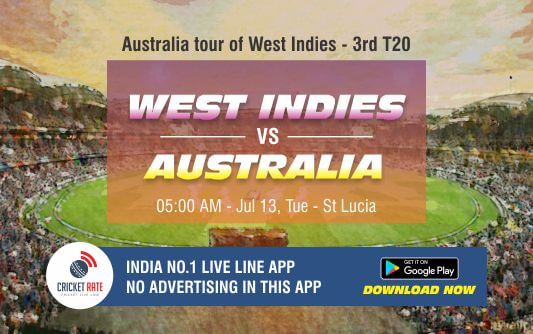 Australia is getting hammered by the West Indies in the T20 series and is now down 2-0. This match is a must-win situation for the team otherwise it would have lost the series. Australia takes a lot of pride in its performances and what we have seen so far has just not been good enough.

West Indies put in a flawless performance in the second T20 and was never put under any sort of pressure. Cricket Betting Tips It is clear that the West Indies T20 team is the favorite to win this series and the T20 World Cup 2021 in a few months’ time.

We could some changes in both teams for this match and there are bound to be some good betting opportunities to explore as well.

Match prediction and cricket betting tips for West Indies vs Australia 3rd T20 2021 is going to be played at the Darren Sammy National Cricket Stadium, Gros Islet, St. Lucia on the 12th of July 2021.

WI VS AUS TEAM PREVIEWS
WEST INDIES
The West Indies made a couple of interesting changes to its team for the second T20. It brought in Andre Fletcher and Sheldon Cottrell to the team in place of Evin Lewis and Obed McCoy. Clearly, Evin Lewis and Obed McCoy were the two best performers for the West Indies against South Africa and so these changes were more about experimenting rather than for necessity.

West Indies is building a strong core of players for the T20 World Cup 2021 and this series is being used to test players rather than just looking for a win.

This tells us that we should be ready for some more unexpected changes including those that can destabilize the team.

The West Indian batting remains more powerful than the Australian lineup by far. There is nothing that is going to stop the players from trying to hit sixes every opportunity that they get. We have been quite successful backing West Indies to hit more sixes than Australia and that is something we recommend once again.

It is not going to work every single time but so far the going has been good!

Similarly, Hayden Walsh Junior, Obed McCoy, Sheldon Cottrell, Fidel Edwards, and Fabian Allen have helped West Indies build up a decent bowling lineup. Cbtf Dwayne Bravo is also back to his best and making a huge difference to the team.

AUSTRALIA
Australia played the worst that it could have imagined in the previous match. Mitchell Starc went for 49 runs in his four overs without picking up a wicket, none of the batsmen apart from Mitchell Marsh put up a fight, and the lack of a finisher was painfully apparent.

It is going to take something special from one of the top-order batters to change things around but there just seems to be no one willing to step up. Australia has to make some changes to its team for this match because losing the series and then making changes is going to serve no purpose.

We think Ashton Turner is going to come into the team in place of Ben McDermott, Alex Carey could get a run, and trying out someone like Rilee Meredith or Andrew Tye is not a bad idea either.

Australia is up against the wall and this has been the time that it has responded strongly in the past. The situation may seem bleak now but with a bit of tinkering, we think Australia can actually put out a much stronger eleven than what it is right now.

Nothing that Australia is doing right now is working but it is not a weak team fundamentally. It is just in poor form and that can turn around very quickly in T20 cricket. The market is undervaluing what it is capable of.

WI VS AUS TOSS PREDICTION
The team that wins the toss is going to want to field first. We have seen both matches being won by the team batting first but all the captains seem to want to chase when given the choice.

PITCH AND CONDITIONS
The weather in St. Lucia has been quite good and we have not had many stoppages. There is some rain predicted on match day as well but the forecast improves around the time that the match starts and we should be able to get another full 20 over a side contest to enjoy.

The pitch has been flat and without too much pace. The little bit of extra bounce makes smashing sixes easier for the batsmen. The boundaries are also quite small and not much of a challenge for the smashers we have seen on display.

WI VS AUS BETTING TIPS
We are going to back Australia to win this match. Things are looking bleak but we believe this is a good opportunity to get ahead of the market. You could see some important changes in the Australian team that helios elevate its game. Cricket Tips Free  It was just one match back that Australia was in a dominant winning position against the West Indies.

It is certainly capable of winning once more.

Bet on Australia to win.