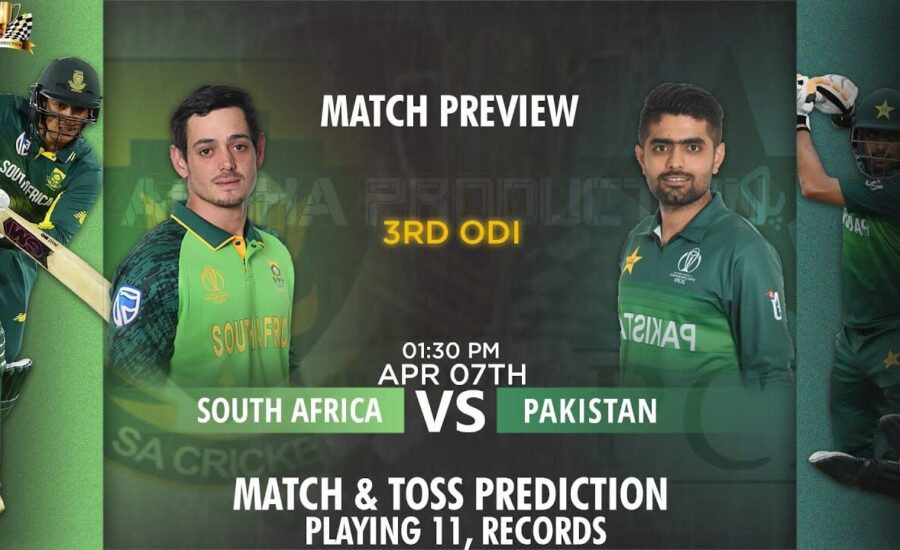 South Africa vs Pakistan 2nd ODI turned out to be an epic contest. Some excellent batting performances from South Africa were followed by one of the greatest ODI innings you will ever see by Fakhar Zaman.

The series is now locked at 1-1 and we are heading back to Centurion for the decider. Online Cricket Id There are a lot of things to look at while contemplating the third ODI. Five South African players from the eleven that featured in the second match are not going to be available for the decider since they have left to join their IPL teams.

Pakistan has a lot of questions to answer regarding its middle-order as well and we think a couple of changes are likely here as well. With almost 700 runs scored in the previous match, the bowling attacks are also going to be under scrutiny.

South Africa vs Pakistan 3rd ODI 2021 is going to be played at SuperSport Park, Centurion on the 7th of April 2021.

This match is going to test the depth of the South African team in a very public forum. The cricket-loving public in South Africa is unhappy that five of its stars have left national duty for the IPL. That is, however, what their board allowed them to do and so this match represents a shift of sorts.

Who are going to be the replacements then?

Janneman Malan will open the batting and he is another very good young player. He has played three ODI’s already with a best score of 129 during that time. Beuran Hendricks, Lutho Sipamla, and Junio Dala could be the three replacements for the fast-bowlers.

They lack the extra pace of Rabada and Nortje but they are very skilled replacements. Hendricks is a tall left-arm quick that brings the ball back and could trouble the Pakistani batsmen.

Wiaan Mulder and JJ Smuts are going to be fighting for the last remaining slot in our opinion. Both of them could also get a chance if South Africa decides to pick one genuine bowler less and opt for more all-round cover.

Either way, this South African team is not weak at all. Markram, van der Dussen, Bavuma, and Klaasen are all very good batsmen, while Phehlukwayo is an excellent all-rounder and in decent form too.

Don’t be caught up with the missing names as the replacements are very talented as well and playing in their home conditions.

The margin of the loss that Pakistan suffered in the second match was not very much in the end but that was only down to the brilliance of Fakhar Zaman. He may be inconsistent but he really knows how to score big when he gets in and that is something invaluable for Pakistan.

Pakistan’s batting is very top-heavy at the moment. Fakhar Zaman, Babar Azam, and Imam ul Haq are the three batsmen that you can expect something from in almost every match. Mohammad Rizwan came into the series with fantastic form behind him, however, the going has not been as easy in South Africa so far.

After him, though, there is a sharp fall-off in quality. Danish Aziz, Shadab Khan, and Asif Ali are not dependable and seem to be a bit short of the quality required. Shadab Khan is a good bowler but he is definitely batting one or two places higher than he should be.

We think Sarfaraz Ahmed could get a chance to play and Mohammad Nawaz could be asked to replace Danish Aziz. Similarly, Hasan Ali could be in line to replace Mohammad Hasnain who has proven to be quite expensive at the death.

Whatever the team selection, though, there are some facts that do not change. Pakistan’s bowling is very good and can run through this South African lineup on its day. Its batting, though, is a bit lopsided and needs one of the top-3 to fire in every single match otherwise a collapse is not too far away.

The team that wins the toss is going to want field first. There have been 29 ODI’s played at the Centurion and 20 of those have been won by the chasing team. Winning the toss should be looked at as a big advantage.

The weather forecast for Centurion on match day predicts a little bit of rain early on but then nothing afterward. We should be able to get the match started on time and enjoy a full uninterrupted contest.

The pitch at the SuperSport Park was a bit slow in the first match. It got better to bat on as the match went on and we hope that the surface this time around would be better for batting. A lot of runs are on offer and we think another high-scoring match is likely.

Genuine pace and wrist-spin are the two kinds of bowlers that we think will have the most impact.

The bookmakers are factoring in a massive drop in performance for South Africa because of their missing players but we don’t necessarily think that is going to happen. The players stepping in are talented and have tasted international cricket before. Cricket Betting Tips They will enjoy this opportunity to make a mark in home conditions. Also, Pakistan’s lopsided batting lineup makes us uneasy.

Bet on South Africa to win.