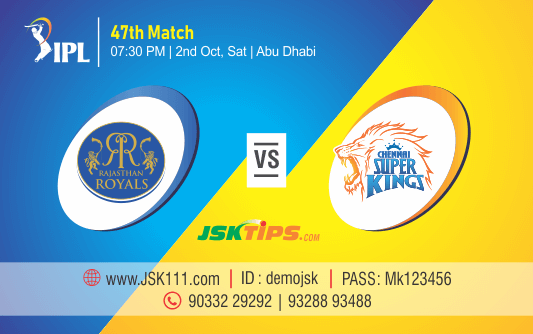 RR VS CSK MATCH & ANALYSIS
This is it then. Chennai Super Kings will be delighted to become the first team to qualify for the playoffs, knocking Sunrisers Hyderabad out of the playoff race. All eight teams have now played a total of 11 matches each and six of them are competing for the three remaining slots. Also, with Delhi Capitals and Royal Challengers also looking good, the race is basically between the four teams for one remaining spot.

The two sides will move to Sheikh Zayed International Cricket Stadium, Abu Dhabi to play the 47th IPL 2021 match. The match will be played on the evening of Saturday, 2nd October 2021.

RR VS CSK BETTING TIPS
This may not be an important match for Chennai Super Kings from a qualification point of view, but the importance of this match from the Royals’ point of view cannot be overstated. Chennai Super Kings have been a better side thus far, but we may see a trimmed down version of them in this upcoming contest. The Royals, on the other hand, have been far from their best, but with nothing to lose, they might well be at their best. Having said that, the Super Kings definitely have an advantage with almost all of their players being in prime form. Considering that and the other above stated factors, betting on a Super Kings win should be the way to go here.