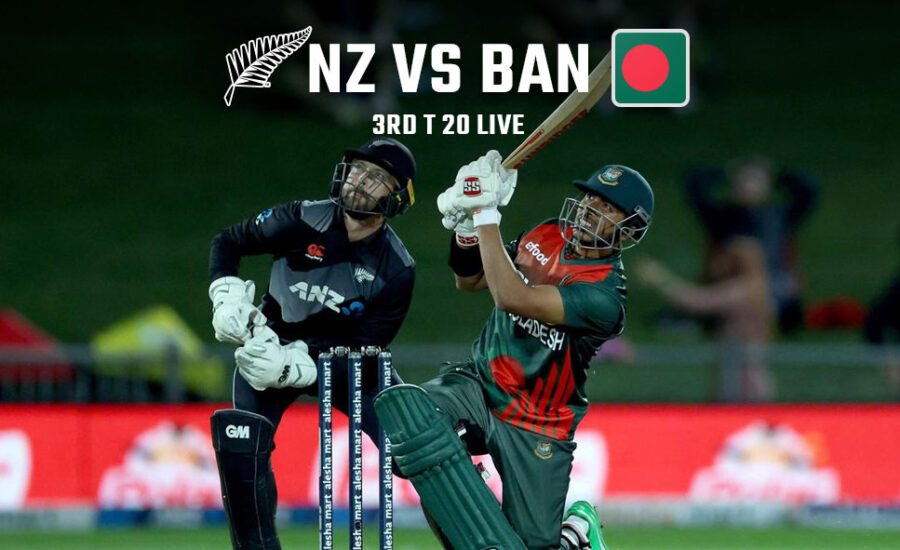 An extremely entertaining second T20 international between New Zealand and Bangladesh once again ended in victory for the hosts as the tourists continue to search for their first win on New Zealand soil.

The match was affected by rain and the DLS target had to be recalculated (which lead to some unique circumstances as the chasing team had no idea of the target it was chasing!) and while Bangladesh gave it a good go, it fell short by a fair margin in the end.

New Zealand was pushed more than it has been in the previous matches but it will be pleased that its youngsters continued to deliver. We are now looking forward to the final match of the series and of the tour. Online Betting Id

Can New Zealand continue to maintain its phenomenal record against Bangladesh or will the tide finally turn for the Bangla Tigers?

New Zealand will be very pleased that its team is managing to come back from tough situations even when some of its leading players are not available for this series. The same was the case in the second match as Glenn Phillips and Daryl Mitchell staged a comeback and accelerated the scoring at just the right time.

Phillps has been very consistent in T20 cricket off-late and it looks like his place in the middle-order is pretty much confirmed.

New Zealand’s batting is very strong and although none of the top-order batsmen were able to convert their starts into big scores, they all batted with a lot of intent. Finn Allen showed a few glimpses of what he is capable of and we think it is just a matter of time before he smashes a big score in a handful of deliveries.

With Martin Guptill, Devon Conway, and Will Young as the top-4, there is a lot of batting talent to call upon. Once Kane Williamson and Ross Taylor come back, it is likely going to be Young and Chapman that miss out.

The fact that New Zealand’s batsmen play the rising deliveries very comfortably is also going to be a big factor in this next match.

New Zealand gave Adam Milne a match and rested Lockie Ferguson in what can be termed as a like-for-like replacement. We would love to see both Ferguson and Milne in action for the final T20 on what is the fastest pitch in New Zealand.

Either way, though, there is a lot of depth in the New Zealand bowling attack and they should be able to get the better of the Bangladeshi batsmen once more.

Bangladesh had a few chances to get ahead in the game but just when ti seemed it was getting close, New Zealand seemed to be able to pull away. There were two areas in which the Bangladeshi team was exposed in this previous match.

The first was the power-hitting. Apart from Soumya Sarkar, who played an excellent inning and kept his team in the game, none of the other batsmen were even close to what is needed at the international level today.

Mohammad Naim opened the batting and ended with 38 from 34 deliveries in a match where they were chasing 171 in 16 overs. That is inexcusable from an opening batsman. Only Mahmudullah seems to have the capability to clear the boundaries regularly and that he is not in the best of form.

Any decent score looks out of reach for Bangladesh at the moment whether they are batting first or chasing.

The second area in which Bangladesh was inadequate was pace bowling. None of the fast-bowlers seemed to have the pace to trouble the batsmen or the skills to execute their yorkers at the death. Not playing Mustafizur Rahman was understandable, however, Shoriful Islam is not going to change things dramatically.

The final match is going to be played on a surface that has assisted the fast-bowlers and it just does not seem likely that Bangladesh is going to be able to make the most of the conditions on offer.

There are some scattered thunderstorms predicted for match day and that could be a dampener for everyone concerned. We may have another DLS-affected game and the probability of an upset does go up the smaller the game gets but we want to enjoy a complete match and not be robbed of entertainment!

The pitch is going to be fast and bouncy. Cricket Betting Tips There are a lot of runs on offer on what is a very small ground with some truly small dimensions but the bowlers will have something to work with as well.

A lot of sixes, a lot of wickets for the quick bowlers, and in general a very fast-paced match is in store.