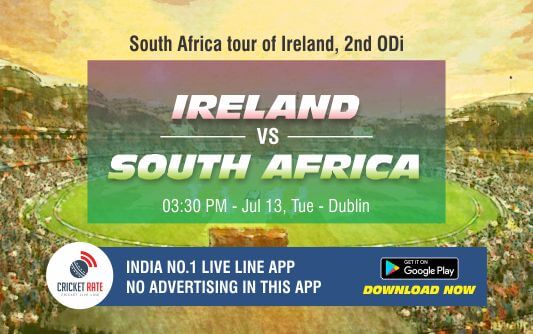 HAR HAR MAHADEV
MATCH WINNER –  NO TIPS FOR THIS MATCH

Ireland vs South Africa ODI series got off to a poor start as the rain intervened and prevented the first match from being completed. Online Cricket Id It was heartening to see Ireland put up a decent fight against South Africa until play was possible and hopefully the same will be seen in the second match as well.

South Africa would be disappointed to have missed out on a potential five points from the first match. It came into this series in last place in the ODI Super League and needs all the points it can get.

IRELAND
Ireland started cautiously in the first ODI and tried to get to a defendable total. The tactics from the home team were very clear. They did not try o get to a huge total at all at any point during the match. They wanted to play at around 4-5 runs an over while keeping wickets in hand and then trying to go hard at the end.

This is an old style of playing and the bigger teams no longer tend to follow this conservative style of play but for Ireland, it was the right choice.

William Porterfield, Andrew Balbirnie, Harry Tector, and Locan Tucker will look to do the same in this match also. Match Tips  Paul Stirling is the best batsman that Ireland has ever produced but he struggled for runs in the first match and looked dreadfully out of touch.

We did not get a chance to the Irish bowling but we know it is not great. Mark Adair, Joshua Little, and Andy McBrine are decent without being outstanding. Simi Singh and George Dockrell will take up the spin bowling duties.

Ireland is a limited team that played pretty much to its potential in the previous match.

SOUTH AFRICA
South Africa did not pull any punches in the previous match and this is why it would have been disappointed to not have made more of an impact on Ireland. Kagiso Rabada, Lungi Ngidi, Andile Phehlukwayo, and Tabraiz Shamsi are all first-choice ODI players.

They would have fancied themselves to have gotten more wickets in the 40 overs that they did bowl.

Quinton de Kock was rested and so Kyle Verrayne picked up the gloves. That is a good move considering the amount of cricket that de Kock has played in recent times.

Aiden Markram, Janneman Malan, Temba Bavuma, Rassie van der Dussen, Kyle Verrayne, and David Miller all still form a very strong batting lineup. We have seen this lineup get in trouble against quality bowling attacks in the past but we do not see that happening against Ireland.

IRE VS RSA TOSS PREDICTION
The team that wins the toss is going to want to field first. There is always some rain around and DLS calculations could come into play once more.

PITCH AND CONDITIONS
The conditions in Dublin are much improved when compared to the first match. The chances of rain playing spoilsport are much lesser. The pitch at the Village played quite well and there were a lot of runs on offer. Online Betting Tips The outfield was a bit slow, however, that should improve as the sun comes out for longer times.

A score of around 300 is not out of the question batting first and that may not be enough to win either.