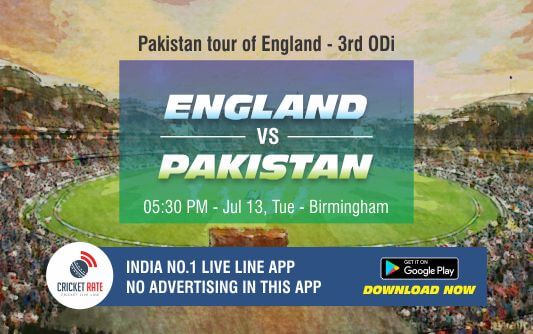 There is a joke on social media that now England has wrapped up the series, it should rest some players and give its bench a chance. Unfortunately for Pakistan, they have lost a series to a group of very talented players of a nation that has the deepest white-ball talent pool in the world right now.

Pakistani fans are angry and are asking for heads to roll. The series might be over but there are still ten ODI Super League points on offer.  Online Betting Id We expect changes to be made for both teams ahead of this final match as the action shifts to Birmingham.

This series has already been quite fruitful for us from a betting perspective and we think there is a lot of value to unlock in the third ODI as well.

Match prediction and cricket betting tips for England vs Pakistan 3rd ODI 2021. The match is going to be played at Edgbaston, Birmingham on the 13th of July 2021.

​ENGLAND
England came into this series in some truly unimaginable circumstances as the entire squad had to be changed at the last minute. To be able to win the first two matches and have a chance at a 3-0 scoreline against a top cricketing nation is extremely laudable.

Ben Stokes has been very creative and aggressive with his captaincy. He keeps going for wickets throughout the innings even when his bowlers go for a few runs. We don’t think he has been put under pressure by the Pakistani batsmen but that is not his fault.

We could see a few changes for this match. Will Jacks could get a run at the top of the order, Daniel Lawrence may get a chance to get some game time in the middle order, and two to three players in the bowling attack could also be rotated out.

This sort of experimentation is not going to be weakening the England side at all. There is still a lot of power and depth in the English batting even if some of the senior players don’t play. Phil Salt and Will Jacks could be devastating opening the batting and there are a lot of all-rounders to chip in as needed.

England’s bowling has been led by Saqib Mehmood and he is going to be the main threat once more.

PAKISTAN
Pakistan’s team is under a lot of criticism right now and the players will be desperate to avoid a 3-0 scoreline. There are likely to be at least a few changes as the team searches for answers.

Imam ul Haq seems to be one of the players that are going to miss out. He may be replaced by Abdullah Shafique but he is also a pretty conventional kind of batsman. Shadab Khan is the other player that is in the firing line. Match Tips He is not a good enough batsman to justify being called an all-rounder and his bowling is also average at best.

Usman Qadir is a much better option that is available to Pakistan from an attacking bowler’s perspective.

Faheem Ashraf could also find himself dropped in favor of Agha Salman to try and boost the batting depth.

Whether Pakistan makes these changes or not, the fact remains that it is a conventional batting team that needs to evolve. Sohaib Maqsood is the only player that seems to have the talent to hit sixes regularly but his pedigree in 50 over format is untested.

Babar Azam and Mohammad Rizwan have to score runs for Pakistan to be competitive.

Hasan Ali bowled with fire and ended up with five wickets. Shaheen Afridi was impressive but he has been far from his best. Haris Rauf has had a quiet couple of matches and maybe Mohammad Hhasnain could be given a chance.

There is no doubt about the bowling potential of this team but it appears as if the team is afraid to make changes.

ENG VS PAK TOSS PREDICTION
The team that wins the toss is going to want to field first. Birmingham is an excellent cricket wicket and should not change much over the course of the match.

PITCH AND CONDITIONS
Birmingham should get a fairly sunny day on the day of the match. There may be the odd shower but overall we should not have a problem getting the entire match in. This is a cricket wicket that generally has a nice amount of pace and bounce in it. The outfield is quite large and the square boundaries can be hard to clear.

This is good news for spinners and short-pitched bowling.

A score of around 270 should be considered par batting first.

ENG VS PAK BETTING TIPS
Pakistan is a team in turmoil and short on confidence. The English bowlers have been able to get the better of Babar Azam and Mohammad Rizwan so far and that could easily happen in this last match as well. Cbtf Cricket Pakistan’s bowling has not been at its best either. England may very well make a few changes but it could easily win this last match and up with a 3-0 scoreline.

Bet on England to win.